Thematic Development in The Movie Version by Emma Wunsch

WARNING: The following post discusses details contained in The Movie Version by Emma Wunsch which may spoil the book if you have not read it yet. You've been warned! 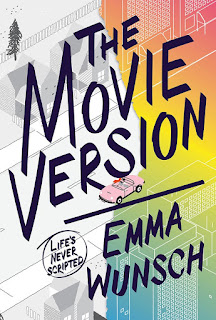 Novelists seek to create appropriate pacing, cohesive plot development, and effective dialogue in order to engage and ground readers in the world they have established. While not limited by the parameters of the genre, young adult authors have the added responsibility of appealing to the doubts, frustrations, and concerns of the modern teenager in a way that seeks to bridge the gap from adolescence to adulthood in this ever-changing climate. Undeniably, fiction often serves to prepare readers to face the frequently harsh realities of life.  For this reason, many young adult novels attempt to create protagonists who both seek to understand and find their place in the world at large. Likewise, in her novel The Movie Version, Emma Wunsch explores the main character’s desire to recreate, control, and ultimately understand the human experience to suggest that not all stories will provide a happy conclusion.
Initially, Wunsch’s world-building suffers as a result of limited dialogue tags and excessive telling. Consequently, the beginning of the novel requires a certain level of concentration that may dissuade the typical young adult reader. Moreover, early in the novel the author relies on establishing character via telling and not showing which distracts rather than connects them to the main characters. It is worth mentioning that most of this problematic telling happens before the reader can establish an emotional connection to the characters and decide for himself or herself how to feel about the relationships because the entirety of the plot demands an understanding of the bond between a sister and her mentally ill older brother. Admittedly, these issues do not hinder the author’s ability to hook and capture interest of readers – which speaks to the strength of the overall narrative.
For example, early in the novel the protagonist, Amelia, constantly reminds readers “this is what it’s like in Toby’s world” (Wunsch 5) rather than the author showing and allowing readers to formulate their own opinions. Being told by the narrator how different she is from her brother is not the same as the author showing readers the difference. Initially, it is difficult to bond with or root for either of these characters because they incessantly need to speak to each other via movie references and quotations. Young adult audiences will be familiar with some of the newer titles, but unless they are cinematic connoisseurs, some of the references might prove distracting.
Furthermore, the author’s attempt at fostering sympathy for and connection with the main characters via movie quotes is not nearly as effective as the characters desire to filter their own existence through the same lens. There is no denying that the main characters, Amelia and Toby, have forged a bond by watching a copious amount of movies. Their love for these movies allows them to communicate by having entire conversations composed of nothing but movie quotations; however, most readers might find this to be authorial posturing. It is only when Amelia reveals the significance of precisely what the movie version is that Wunsch is able to tap into the universal human desire to recreate, control, and understand the most difficult aspects of life that the story becomes inclusive. Consider the following passage:
“What’s the movie version?” Epstein asked.
“It’s the better version,” I said, which I immediately regretted. Except for Toby, who kind of invented the idea, I don’t think I’ve ever really told anyone about the movie version.
“Better?”
“Better like the audience is willing to pay ten dollars to see it. Not better like happy. There are plenty of sad movies, like The Fault in Our Stars, which was amazing, or If I Stay, which I didn’t like. But movie-sad is way better than non-movie-sad.
(Wunsch 23-24).
Here we get an understanding, for the first time, about the protagonist’s deep desire to recreate and control her own experience (at least in theory). This notion is extremely relatable to readers both young and old because humans make mistakes and not all of them are life altering or catastrophic. In fact, very often the little mishaps are the ones we obsess over and replay in our minds a million times until the memory no longer causes us embarrassment, pain, or exposure. Wunsch’s careful attention to this idea makes the main character’s struggle to cope with and (at times) deny the existence of her brother’s mental illness more relatable as she taps into the universal folly of the human condition. Writing relatable characters requires this connection and inclusivity no matter how strong the concept or plot may appear.


Throughout my own reading and writing, I’ve been thinking about endings and why they are often so disappointing in literature (and life). In a given novel – readers meet new people, fall in love with them and their world, and forge a meaningful connection to their struggle only to be cast out on the last page as if we have not known them intimately. Most authors understand this and seek to provide the most sufficient resolution possible. Readers have a deep desire to know the characters are okay and we hunger for closure that tells us how these characters have dealt with their problems. This desire for completeness is all a part of human nature’s need to understand and something Wunsch’s story touches on. But life is not like a movie. Often we never get a second chance, rarely are we able to control the outcome, and most of the times things happen we will never understand and that is the very purpose of The Movie Version. In this novel, the mental illness is ultimately not a thing to control and the protagonist’s struggle to accept that reminds us even the most unfulfilling endings present an opportunity to grow. Conclusively, this is a testament to the author who created the world and reminded us of our definitive connectivity– otherwise, why would we care about any of this at all? We wouldn’t.
Posted by Tiffany L. Berryman at 12:39 PM No comments: