"To live a creative life, we must lose our fear of being wrong." ~Joseph Chilton Pearce


You’d think as a creative person, I wouldn’t have to work so hard at it. Creativity is- after all- a gift. However, growing up my imagination was treated more like an explanation for the very ways of my existence. “Oh, you know Tiffany…she’s creative.”
I never understood why people tend to make it sound the like very word “creative” should always be separated by quotation marks. (Oh well, she’s “creative” you know.) While growing up, I was often made to feel as if my ability to create was somehow less of an accomplishment because it was always viewed as God given. Certainly my imagination has always been with me and sadly it was not learned in school, accompanied by some fancy Doctorate in Originality.
Since I don’t come from a particularly creative family, you can imagine how blatantly I stand out and how little I tend to fit in. You’ve undoubtedly heard of the black sheep…well, I am the vibrantly multicolored, astounded glittery, unabashedly unapologetic one.
Being a writer is a terribly secluded calling- especially when you are, quite frankly, existing between two worlds. The crowd pleaser in me wants to entertain and be entertained, hit the town with my friends and soak up all the social pleasures of being single but the artist in me knows that any time spent not practicing my craft or pursuing the next project is virtually wasted.
So if the key to happiness in life is all about balance, juggling, and compromise…being a creative person in a world that desperately tries to squelch that flame is even more difficult. We don’t have the luxury of waiting for inspiration to strike while we meander mindlessly along. The pressure to find originality in characters that have already existed, storylines that have already been told and scripts that have been played out a million times before is daunting. (This is especially so when you have the added pressure of trying to earn a living in the process.)
In a very Eat, Pray, Love moment, I took an entire year for myself to soul search. People had been coming at me from all directions-the wrong people, moving in the wrong direction. Suddenly, even my “God given” creativity seemed to have deserted me. I had no desire to be in front of a camera or write or create anything for that matter. Nothing made sense, my Universe was thrown into a tailspin and my seemingly endless optimism had vanished. The only thing that was clear was that I had no idea who I was anymore and wasn’t sure if I would ever find the “me” that I used to be before I thought I had it all figured out. Cecil B. DeMille said, “Creativity is a drug I cannot live without,” and as I ambled through that year without it, I felt defeated. Reluctantly, I waved the white flag and surrendered. But just when I began plotting a different course all together-something fantastic happened. I caught a glimpse of my old creative self in that tricky mirror of time.
As it turns out neither my creativity nor the desire to pursue it, had abandoned me after all. While other options had presented themselves, I now realized that there was a bigger reason none of them managed to fit and I was taking with me an entirely renewed sense of purpose. We must be who we are, always. We must pursue –with reckless abandonment- our passions. Whether you are a trial attorney, hoping to score the next big case or a writer like me-there is only one way to fulfill your destiny and that is to actively live it! A heart filled with gratitude has no room for fear inside of it… So it is my sincere hope for you, whatever you are doing, that you are as grateful for the ability to do it as I am today for mine. It is my sincere wish for you that 2011 will be the year that your imagination meets the real world.
Posted by Tiffany L. Berryman at 1:59 PM 1 comment: 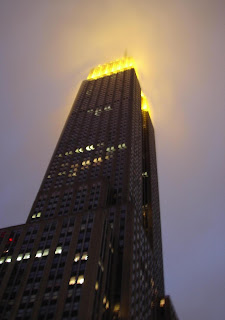 I use pictures to enhance my creative inspiration when writing so that I can literally place myself in a scene in every way possible. For some reason I used to view the visual stimulation as sort of a cheating of the process but over the years photos have become essential tools in my creative bag of tricks. I snapped this shot of the ever magical Empire State Building because, let’s face it, what could be more stimulating? Enjoy!
Posted by Tiffany L. Berryman at 3:25 PM 1 comment:

The Merging of Me

"For me, the spiritual quest will be a life-long work in progress." ~ Dan Brown

In sports, they sometimes say that the best offense is a good defense. But in life, acting defensively can prove to be the undoing of a person. When we are reactive, rather than proactive…the ball remains in the other person’s “court” and we surrender control to their return.

Certainly, we all have mechanisms to help us deflect, dodge, and navigate successfully through the potentially explosive minefields of life. Some people use self-deprecating humor to hide insecurities or hidden fears and others project their issues through judgmental manipulation.

For the last few months, I’ve been on somewhat of a quest to merge the many aspects of myself into a more satisfying and unified path. However, sometimes we outgrow our shells before we’ve found a suitable replacement for the next phase of our journey and that can be just as painful as never growing in the first place. I’m still unsure at times about integrating my spiritual self in regards to my career but my friends have provided me with tremendous council, giving me a private outlet to vent. Now, I understand the “path” is of little significance compared to the way in which we choose to walk it because your life may be the only Bible some people will ever read.

This doesn’t mean we won’t make mistakes or get struck by lightning from time to time. On the contrary, the importance of this journey resides not in never falling- but in the manner with which conduct ourselves after we have fallen. Each time we get knocked down, whether by our own hand or circumstances out of our control, provides indelible opportunity for our soul’s to grow.

If we are honest with ourselves as we grow, I think most everyone gets to a point in their life or career when they start questioning the validity of what they’ve been doing. Some manage to successfully ignore that inner voice telling them a change is in order because they feel stuck, financially lured or do not want to waste years of schooling and experience.

Last year, my inner voice began been screaming at me to make a change. I’ve mulled over many opportunities and spent the summer writing. I am glad that I haven’t totally abandoned my roots because I am certain those life lessons brought to me through sports have served a purpose on this path as well.

Creating ourselves is a lifelong process and it really is the journey that matters most in the end. I look forward to exploring that more on this blog and I hope you’ll join me.

Blessings, T.
Posted by Tiffany L. Berryman at 11:03 AM No comments: